A Human-Friendly API for Wikipedia

Motivation: There's a lot of information on Wikipedia, and people want to use it. Sometimes, these people are programmers; and sometimes, their customers aren't computers.

I needed to parse some information from Wikipedia programmatically and present it in a human-readable format, i.e., for clients. I found that a bunch of other people had similar issues (e.g., here and here), so I've open-sourced my solution.

Note: this module is currently housed within a larger project; I'll be writing more on that later.

To start, we need to understand the current Wikipedia API, the so-called MediaWiki API. The documentation is fairly comprehensive, although it's not easy to find what you're looking for in those dense pages.

The MediaWiki API returns a JSON (or XML, etc.) response with the information you've queried. But the response is pretty cryptic: to get the actual information you're looking for, you need to access the proper keys and work some other magic.

For example, here's the beginning of the JSON response for Michael Jordan's Wikipedia page:

Note that the text itself is also still in HTML.

The methods in wikipedia.py are designed to extract the information (i.e., the "*" field above) and parse the HTML, with some help from the *HTMLParser* library. In the above case, our method looks something like this:

In some cases, wikipedia.py also uses BeautifulSoup to explore the target page. For example, say we want to extract information from the table below (again, from Michael Jordan's Wikipedia page.) 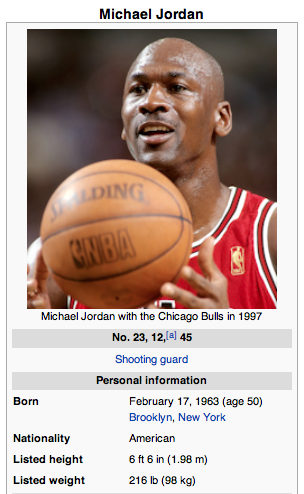 We do some fairly low-level searching in the table to check every row and extract information based on the row's content formatting. At this point, wikipedia.py can extract rows with one-to-one (e.g., "Nationality: American") and one-to-many (e.g., "Career highlights and awards: 6x NBA Champion...") formats.

The output for MJ's table is as follows:

Feel free to fork, comment, criticise, or (best of all) get in touch. This was created as a sub-project and is by no means perfect, but I certainly hope it can be useful to some.